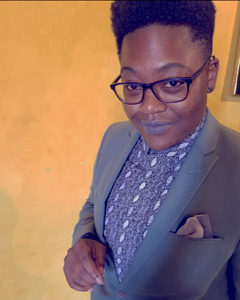 SA Smythe is a poet, translator, and scholar of Black European literary & cultural studies and Black trans poetics working as an assistant professor in the Gender Studies and African American Studies departments at UCLA. They are deeply invested in the coalitional project of black life, black study, and relishing other nonbinary experiences across the diaspora. Smythe is working on several book-length manuscripts. The first is titled Where Blackness Meets the Sea: On Crisis, Culture, and the Black Mediterranean. It is a transdisciplinary study of black Italian, migrant, and postcolonial cultural production focused on the racialized notions of citizenship and belonging in the wake of self-initiated “crises” of migration and the attendant levels of dispossession in the Mediterranean. The second is a collection of poetry, titled proclivity, which focuses on a familial history of black migration (between Britain, Costa Rica, and Jamaica), trans embodiment, and emancipation. The third is a translation of trans rights activist Porpora Marcasiano’s 2018 political memoir, L’aurora delle trans cattive [The Rise of the Bad Trans Women], from Italian to English. Smythe is editor of a forthcoming special issue of Postmodern Culture titled Troubling the Grounds: Global Configurations of Blackness, Nativism, and Indigeneity. Their writing has appeared or is forthcoming in Transgender Studies Quarterly, Palimpsest: A Journal on Women, Gender, and the Black International, Middle East Report, Postcolonial Studies, National Political Science Review, Critical Ethnic Studies, Catapult, Stranger’s Guide, The Feminist Wire, okayafrica, Johannesburg Salon, Critical Contemporary Journal, and elsewhere.