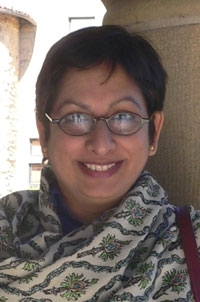 Trained as a cultural anthropologist, Purnima Mankekar has conducted interdisciplinary research on media and publics/public cultures with a focus on the politics of affect. She is currently completing a book on affective labor and the production of futurities in the Business Process Outsourcing industry in Bengaluru, India titled Future Tense: Affective Labor and Disjunctive Temporalities (co-authored with Akhil Gupta). She is the initiator and convener of an international and interdisciplinary consortium of scholars working on a collective project, Publics on Edge, that seeks to examine how transnational regimes of affect shape politics in Asia, Australia, and Europe. Her first book, Screening Culture, Viewing Politics (Duke; 1999) examined the role of state-run television in the affective construction of “Indian Womanhood.” Her most recent book, Unsettling India: Affect, Temporality, Transnationality (2015; Duke 2015) was on how transnational public cultures constitute India as an archive of affect and temporality. Her co-edited books include Caste and Outcast (co-edited with Gordon Chang and Akhil Gupta; Stanford University Press; 2002) and Media, Erotics, and Transnational Asia (co-edited with Louisa Schein; Duke; 2013). She has received numerous awards and fellowships for her research including a Mellon Postdoctoral Fellowship at Duke University (1997-98), a Bunting Fellowship at the Radcliffe Institute for Advanced Study at Harvard University (2000-01), a Stanford University Humanities Center fellowship (2005-06), and was a senior research fellow at the Asia Research Institute, National University of Singapore (2013).