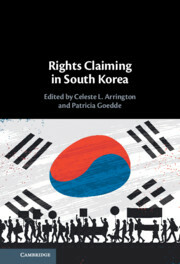 Despite some policy gains and expanded civil liberties, sexual minorities in South Korea face challenges from both conservatives and liberals. While anti-LGBTI conservatives seek to block equal rights and anti-discrimination laws, many liberal politicians have been reluctant to embrace sexual minority rights as fundamental human rights. In many instances, they portray sexual minority rights as premature, rather than permanently impossible, asserting that it is “not yet” the right time in Korea. This chapter discusses early LGBTI mobilization in the 1990s in three parts: the solidarity politics cultivated with labor and emerging human rights activism against state violence and national security surveillance; the untimely deaths of LGBTI activists; and so-called youth protection policies that deferred freedom and empowerment for LGBTI youth. This discussion is paired with an analysis of how LGBTI rights activism fared during and after the Candlelight Protests in 2016-2017 in what Han calls a “politics of postponement.”

About the book, Rights Claiming in South Korea (2021), edited by Celeste L. Arrington and Patricia Goedde:

Although rights-based claims are diversifying and opportunities and resources for claims-making have improved, obtaining rights protections and catalysing social change in South Korea remain challenging processes. This volume examines how different groups in South Korea have defined and articulated grievances and mobilized to remedy them. It explores developments in the institutional contexts within which rights claiming occurs and in the sources of support available for utilizing different claims-making channels. Drawing on scores of original interviews, readings of court rulings and statutes, primary archival and digital sources, and interpretive analysis of news media coverage in Korean, this volume illuminates rights in action. The chapters uncover conflicts over contending rights claims, expose disparities between theory and practice in the law, trace interconnections among rights-based movements, and map emerging trends in the use of rights language. Case studies examine the rights of women, workers, people with disabilities, migrants, and sexual minorities.