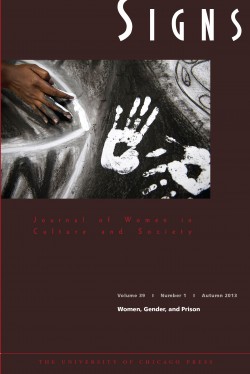 “Like I Was a Man”: Chain Gangs, Gender, and the Domestic Carceral Sphere in Jim Crow Georgia, featured in Signs, Volume 39, No. 1

In 1908, Georgia legislators passed a historic prison reform act that eliminated the convict lease system, replacing it with chain gangs. This article examines black women’ exclusion from the category “female” and white women’s protection from Georgia’s prison regime as a condition of possibility for the passage of this law. Criminalized black women were forced to endure torturous conditions on chain gangs, while white women were protected from violent conditions. In 1908 Georgia also implemented a domestic carceral sphere, forcing black women to work as domestic servants while serving the final portions of their sentences on parole. Georgia’s prison regime operated to reinforce the capitalist logic of Jim Crow, as well as to forestall challenges to racial and gender hierarchy from black women and men and from white women. The exclusion of black female subjects from the categories “female” and “woman” during the consolidation of Jim Crow was central to the process of reinforcing white supremacist patriarchal authority. This unexplored history of Southern punishment as a gendered carceral regime reflects both the violence of imprisonment and the violence of gender categorization.