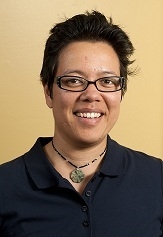 Gwen D’Arcangelis earned her B.A. in Neurobiology from the University of Pennsylvania and her Ph.D. in Women’s Studies at UCLA. She joined the Skidmore faculty in 2016. Her areas of teaching and research include gender, race, and science; feminist science fiction; disease and empire; and feminist and anti-imperial praxis. She has published on the construction of white scientific masculinity in U.S. national security discourse, gendered Orientalism in the U.S. news media during the 2003 SARS disease scare, and on the new forms of security and surveillance in the U.S. biosciences that the War on Terror precipitated. She is currently working on an article chronicling nurse activism during the War on Terror, as well as a book-length manuscript tentatively titled, The War on Bioterror: Neo-colonial regimes of protection, progress, and care, which explores the role that the biosciences and public health—and their gendered and raced dimensions—have played in expanding U.S. Empire during the War on Terror. Her dissertation was titled “The Bio Scare: anthrax, smallpox, SARS, flu and post-9/11 US Empire.” She has also been involved in community engagement projects on queer Asian Pacific Islander justice and environmental justice, and has blogged on topics of science justice.